Globalization 4.0 must build a better world for working people 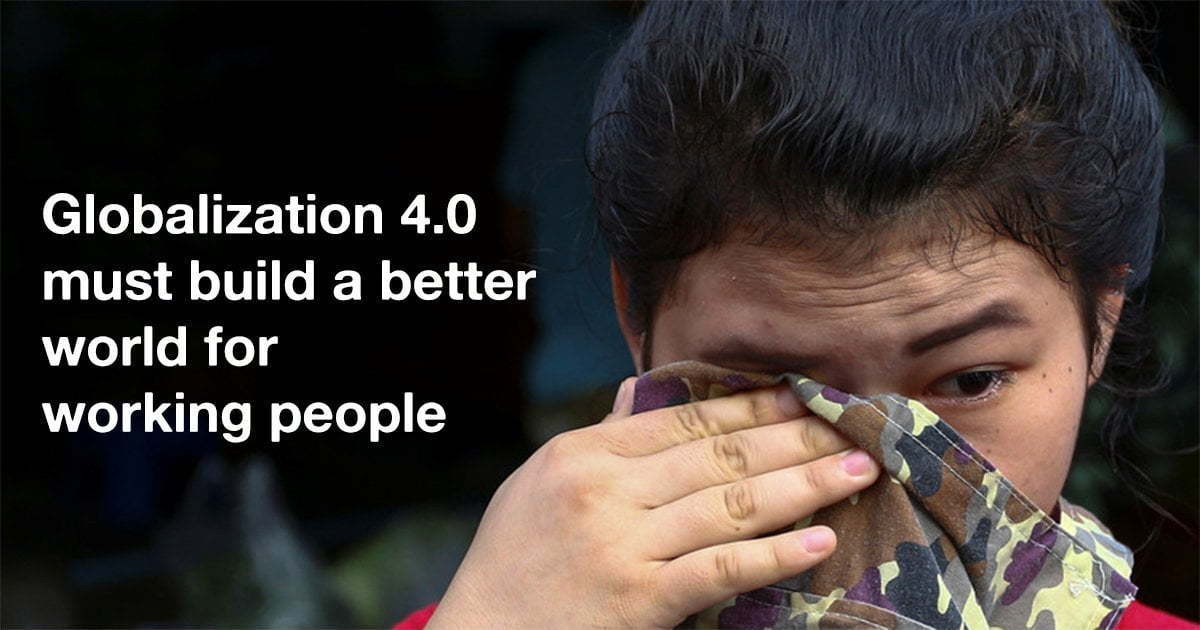 Globalization is no longer assured as the world’s people circle the wagons. They’re looking for cover, looking for protection, getting ready to defend themselves from corporate and authoritarian power.

The convergence of crises in our world today, including conflict, climate change, unemployment, inequality, corruption and the displacement of people, exposes the travesty of the current economic model. It has subjected people and their environment to serving the economy, instead of sharing its benefits.

Today’s global risks need global solutions. But the requisite trust is tragically broken. Global shifts require just transitions. To restore trust and reform globalization, we need to rebuild the foundations of the global economy with a new social contract. In the developed world, the contract born from the two world wars and the Great Depression laid the foundations for shared prosperity with a commitment to full employment, social protection, and human and labour rights as a competitive floor.

This promise was never delivered in the developing world. Subsequently, the greed of dominant economic interests has, in large part, undermined the promise of globalization itself, creating a failed economic model. The breakdown of the social contract, where it existed, began in the 1980s. The inadequacy of a development model for the majority of the world’s people has resulted in today’s fractured world.

A new social contract is vital for a fair competition floor. Its foundations are full employment and decent work, in a world where our dominant model of trade relies on low-wage, often unsafe work, with insecure employment contracts. Decent work is still absent in too many countries for too many people, but its underlying principles remain unchanged. These are:

These principles need once again to be enshrined in a social contract. This would renew commitment to vital public services and full employment, and would require investment in jobs, beginning in sustainable infrastructure and the care economy.

Unions demand that nobody be left behind, with measures to ensure a “just transition” to a low-carbon, high-tech economy. These involve guaranteed pensions for older workers, income support, redeployment support and access to retraining. Lifelong learning is central, as technology impacts on workers’ tasks and creates a continuous need to upgrade skills.

Global GDP has trebled since 1980, yet the share of wealth that people get for their work has declined. Investment in infrastructure, care work and the green economy is inadequate. Global governance should be up to the task of global reform, beginning with a new social contract. However, it still contests that ‘trickle-down’ economic theory, and more recently austerity, have failed.

Global inequality is now an economic risk. It is caused by global trade and investment rules that have favoured finance and capital in developed economies. Global supply chains channel wealth to a handful of global corporations, while workers in those supply chains experience low wages, and insecure and often unsafe work.

A war against unions and freedom of association is being waged, and democracy is being corrupted by concentrated wealth. Too many corporations and their associations are buying or bullying legislators and executive branch officials to influence public policy, to the detriment of working people and the very foundations of a stable and sustainable future.

When the vested interests of the few have been afforded preference over the interests of the great majority; when naked self-interest has been dressed up as modern economic models to justify why wealth is not being shared; when natural resources are being exploited unsustainably; when corporations and the wealthy pay little or no tax; and when there is a severe lack of resources for social protection including health and education, it’s clear that the model must change.

In addition to these challenges and the consequent vulnerability of the global economy, the potential for an even more unequal world is emerging with waves of new technology. There are major deficits in the regulatory environment for ensuring decent work through internet-mediated platforms and algorithms. There is also scant investment in new jobs to mitigate the displacement of workers in the face of the future of production.

Global polling by the International Trade Union Confederation (ITUC) shows that the majority of people are not worried about new technology, but they are deeply anxious about their jobs. Digitalization has given rise to new business models founded on the expectation that workers will further have to give up employment contracts and social security, and forget the notion of a regular working schedule where work, family and leisure can be balanced.

Too many digital businesses are informal, sometimes not registered, pay little or no tax in the country where profit is earned, and take no responsibility for an employment relationship. Without a social licence to operate, they are effectively above the law. They operate outside of jurisdictions, and thereby disrupt key sectors including transport, health, hospitality, financial services, education and more.

Workers providing services through such companies are left to pay for their social security, taxes and training on their own, all while they have no control over pricing, working conditions, safety or their personal data. They compete against each other for an irregular and unpredictable supply of work. Those who own the big platforms reap billions from this model. Traditional companies are also starting to outsource work through platforms, encouraging wage dumping and avoiding responsibilities.

The huge tech companies are buying up all manner of other companies that provide products and services, flaunting labour rights, national regulatory constraints and competition policy.

Unions know that technology itself is not the issue. Innovation will be successful or not on its merits. Societies will embrace the potential of scientific advances in many sectors where it is safe, such as healthcare. Unions have been involved in shaping technological change for decades. Many unions are already organizing freelance workers, building digital cooperatives, facilitating skills development and even providing services for start-up enterprises. Collective action and organizing by workers, including setting floors for contract prices, remain central to building workers’ power.

But for Globalization 4.0 to stand a chance, and to be a basis for healing our fractured world, we demand that nobody be left behind.

Every business must have a social licence to run, entailing them to register and pay tax in each country of operation, to have an employment relationship with those they depend on for work and to contribute to social protection. Equally, we expect governments to mandate due diligence for all businesses to mitigate violations of human and labour rights.

There must be a regulatory environment that ensures:

The Sustainable Development Goals and the Paris Climate Agreement provide a road-map for a zero-poverty, zero-carbon world. But with the necessary political maturity and morality missing, and a world where multi-lateralism is in crisis, conflict is growing and historic levels of people are displaced, it will take all of us to create a just Globalization 4.0.

Eighty-five percent of the world’s people want to see the rules of the global economy changed. To rebuild trust and restore genuine democracies in which people can be assured of rights and freedoms, this challenge must be met.

Let’s take exploitation and corporate greed out of competition.

How To Successfully Sell Jewelry Online + Drive More Sales For Your Business
April 15, 2021

Automation — The Key to Efficiency in Healthcare’s Digital Era
March 14, 2021

Healthcare Analytics and its impact on Hospital Performance
November 9, 2020

Benefits of Outsourcing IT Services for Start-ups
July 13, 2020